AR and VR in Security: Challenges and Opportunities 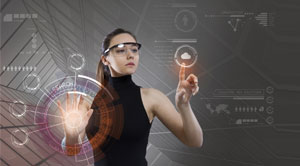 With today’s progress in technology, the internet easily catches sight of information and data like an individual's location, name, date of birth, shopping patterns, types of movies, friends, and social data. This raises the risk of privacy getting shared, although no organization or criminal will have access to one's social security number, bank account details, medical history, and credit card details. And with the extensive use of smartphones, the extent of privacy has shrunk notably.

Augmented reality (AR) and virtual reality (VR) technologies are exploiting the consumers and decreasing privacy to a new level. Concerning both the technologies and them being in their initial development stage, consumers have not the slightest idea regarding how the use of AR and VR devices are raising concerns about privacy. There are many aspects to using AR and VR. Hackers can gain access to a consumer's AR or VR device to record their interactions and behavior. These recordings are later played out or used to blackmail the consumer for certain ransom money. The personalities that need to maintain specific images in the society have to refrain from sensitive situations. Content producers are under constant pressure for VR and AR devices security. The public will always be impatient and request new games with individuals that are more realistic and improved. At the expense of full testing and security checks, an enterprise can speed up a product's. With constant flooding of the market with new applications and products, there will be undiscovered vulnerabilities which will be targeted by hackers. AR and VR tech manufacturers have an obligation to safeguard their devices from hacking. Should an app or device be hacked, the cybercriminals may cause catastrophic. Both technologies have already become an integral part of healthcare. E-commerce internet sites have already been hacked, who attempt to steal consumer records, like card details through saved and connected mobile payment solutions. Thus, hackers will access the bank account discretely and deplete it completely.

As there are benefits to understand in AR and VR, there are its downs as well that have to be dealt with urgently by the developers of devices and apps. Without the elements of good security practices, both AR and VR industries are doomed and prone to malicious cyber attacks.