Telephony as a Service: The Next Communication Disruption 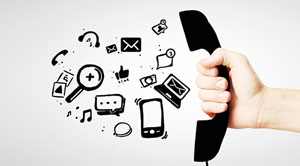 Predominantly domestic phone lines tend to be analog, while business lines usually make use of Voice over Internet Protocol (VOIP) technology. VOIP is a relatively seasoned technology that splits sound into packets of data and reassembles it at the receiver's end as audio. IP-PBX or the internet protocol private branch exchange is the technology responsible for the movement of these packets in a business environment. These IP-PBX systems can not only be installed externally and in-house but also can be managed by a third-party vendor. Be it either in-house or cloud-based, the PBX hardware does the background processing required for various functionalities such as routing transfer to extensions or cells, voice traffic, messages, number management, to name a few.

Ideally, organizations that are deciding to install an IP-PBX on-premises have to be prepared to take a cost hit upfront. As a primary setup, companies need to invest in rack-mounted hardware and have it configured either by suitably qualified internal staff or by a third-party provider. If external help is required for such a setup, any upgrades or additions aimed at expanding the system’s existing capabilities will incur further costs.

On the positive side, the majority of the world’s IP-PBX software is based on open source technology, wherein most common installation is based on Asterisk. While the headline features of open source software are attractive being free, and including a massive and largely supportive user base, use of open source comes with its particular flavor of security concerns and the assumption that users have at least some skill set of technical know-how.